Who is Liable if My Items get Broken or Lost? 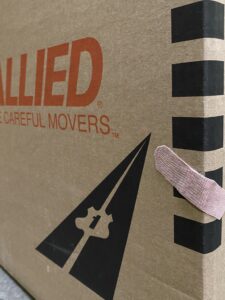 Planning for a move? Will it be local or long-distance? Within or outside of the state? You may not realize that these factors can determine who handles your contract, and by extension, who assumes liability for your shipment.

Most local moving companies are affiliated with major van lines—for example, Santa Rosa Moving & Storage is an agent for Allied Van Lines. Depending on the nature of your move, your contract might be with the local mover or with the van line. Typically, this comes down to factors like distance and jurisdiction.

All moves that take place in the United States are government-regulated. However, the specific regulating body can vary depending on the jurisdiction the move takes place within. This often depends on whether it’s an intrastate move or an interstate move.

The bottom line: Prior to moving, find out who is liable for your shipment.

So, why should you be aware of this? Mainly so you have a clear understanding of who is liable for your shipment. While your move may be conducted by a local mover, if your contract is with a van line, liability for things like loss and damage lies with them as well. “If we move someone locally and one of their items gets damaged in transit, we’ll handle it here in our office,” explains Mr. Lucas. “However, if we move someone to New York and there’s an issue, they would submit their claim to the van line because that’s who is handling their contract.” Not surprisingly, Mr. Lucas says people can get confused by this dynamic. “Customers will sometimes come to us to resolve an issue, even though their contract is with Allied. We do everything we can to help them on our end, but we let them know the liability lies with Allied, not with us.”

Due to this variance in liability, it’s a good idea to read your moving contract and learn who is liable, as well as the terms of liability. Your mover should be able to explain these to you in detail.